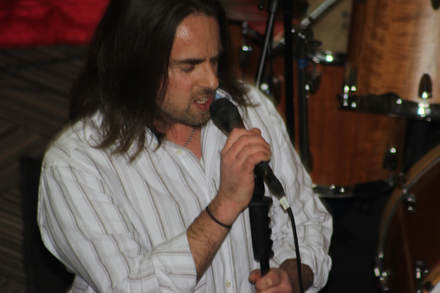 John shares that Christian music has been part of his life since his high school days where he sang in the church choir.  He was a tenor in the A Cappella Choir of Concordia College in New England.  These years were mostly focused on traditional choral music.

Some of the most common venues John has shared his vocal gifts are when in the shower or in his car while driving :)  He is presently a member of Our Redeemer Lutheran Church in Wauwatosa, Wisconsin.

John's favorite bible verse comes from John 14;1.... "Do not let your hearts be troubled. You believe in God, believe also in me".

Greg began his love for Christian music when he joined his father and sister Sunday mornings as a teenager.  After taking important time away to help raise his two wonderful kids, he returned to the Christian music scene in 2007 at Divine Shepherd Lutheran Church in Milwaukee to share trumpet and vocals.  As God has grown him he's been writing most of his instrumental parts for both contemporary and traditional Christian hits and looks to add creative harmony on vocals.  He presently leads the praise and worship team at Divine Shepherd Lutheran Church in Milwaukee and invites you to stop on by!  He has been involved with a prison ministry band, shared trumpet and vocals from 2015 - 2017 for several local churches, and launched Steadfast in the Milwaukee area back in September of 2014.

He shares that "We now have a Steadfast family under God's direction that shows a great chemistry thru consistent examples of being humble, kind and respectful both during practice as well as when delivering God's message thru contemporary Christian songs to the community.  Everyone in Steadfast brings key gifts to this group!"

Being so thankful each day Greg shares the following verse with you from Psalm 107:1...."Oh give thanks to the Lord, for he is good, for his Steadfast love endures forever". 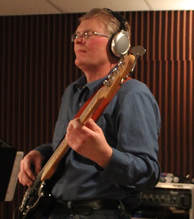 Christian music became part of Tom's life back in 1976 when he played tuba with a brass quintet as well as joining the grade school choir.  He is one of the original members of Steadfast with roots back to 2014.  Tom has played at many school plays and church services along the way and attends Divine Shepherd Lutheran Church in Milwaukee.  For the last 13 years he has been the bass player with the group 'All The Kings Men' out of Racine, WI.  Tom shares that his Aunt Josie taught him piano at the young age of 8 and was a true inspiration to him as a child and to this day.

Some of his most moving verses from God's word come from Psalm 23.  Tom invites you to check it out! 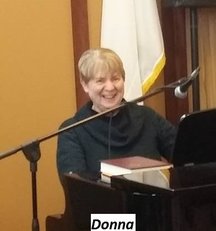 Donna has been involved in worship music her entire life, as her father is a retired pastor.  Her mother was always the church choir director, so it was natural that Donna was a part of church music groups at an early age.  By the time she was in high school, she was often leading songs at church and usually playing guitar or piano.  Donna comes from a musical family and has always enjoyed playing for church services, weddings, funerals, and various church events with her mother, sister, and brother, who all share her love for music.

For the past 25 years Donna has been a member of Mt. Hope Lutheran Church  in West Allis, where she has served on various committees, with a very strong presence in the area of worship.  Donna was a leader in starting a contemporary worship service at Mt. Hope in that late 1990's.  She currently leads the Sunday morning praise band, playing keyboard and providing the lead vocal.  In addition, she prepares the weekly power point and coordinates each week's worship experience with the pastor.  Her other church passion is coordinating the 'Hope Closet', a ministry partnership with the public schools  that provides new clothing and food for homeless students and their families.  But her proudest achievement has been raising three fabulous kids, who are now loving and caring adults.

In September, 2014, Donna was thrilled to be given the opportunity to join Steadfast as a keyboard player and backup vocalist.  She says that the talent and humility in this group are an inspiration every time they play together.

Throughout the years, Donna has learned that God has a way of opening doors for ministry and making miracles happen!  In gratitude for God's love, she shares this Bible verse from Psalm 28:7..."The Lord is my strength and my shield; my heart trusts in Him and He helps me.  My heart leaps for joy, and with my song I praise him."
Luke - (under contruction) 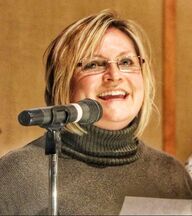 (under construction!)
Evan Guilford - Under Construction